I said in my last post that I wasn’t going to be blogging as much. And I still might not blog as much.

But it’s hard to hold to that today, the day after Hurricane Sandy devastated the east coast, and shut down New York, the city that never sleeps.

We here in the D.C. area had been prepping emotionally and practically for days for this storm. Buying extra water, perhaps power generators, extra food. There was no bread or milk to be found nearby. Costco, COSTCO, was out of bagels.

I made jokes about it; this is what we do when we’re terrified: laugh at danger, try to seem glib and wry.

Looking at the images of Sandy on the weather radar was humbling enough.

This was last Thursday, four days before landfall. Just so we’re all on the same page here… if you could trace that storm with a pencil and then move it over the continental United States, you’d see that it is AS BIG as the country. I think that’s what people are not thinking about…

Hearing the forecasters discuss her impending wrath and how D.C. was likely where she’d make landfall, was distracting at best and deeply concerning at most.

This was yesterday at 9:10am eastern:

I live about 2.5 hours from the Atlantic coastline. The Chesapeake Bay, which is large enough and warm enough to have attracted this storm, is about an hour away.

This house in Pasadena, MD, is about an hour away from me. The person who lived here lives no more.

Sandy was about 350 miles in diameter with winds of 90mph.

The winds and weird weather that precipitates a hurricane began about a week ago with the heavy humidity, off-feeling temps, lack of breezes, almost like an eerie cosmic inhale and then stalkerly exhale breezes on the same day. Foggy mornings, cool nights, then warm mornings and oddly uncomfortable daytime weather.

I hail from the Great Lakes. I love to talk about how Lake Erie is so calm and gentle. Not yesterday:

The fam and I hunkered down in our basement, several feet below the ground from any impending tree’s fall. It’s very dark down there, I call it “The Bunker” because you can’t hear anything while you’re there other than the television or the house’s heating system.

Last night in The Bunker, just before I decided it was time for everyone to join me, I heard wind. It sounded like what I think was probably a 15-second long, 75mph gust rip up our street. I heard that easily and clearly when the TV was on.

This morning, my phone woke me at 7am. I programmed it to only vibrate to text messages, otherwise ring for calls or emergency notifications. Vrrrr. Vrrr. Vrrr-rrr. VrrVrrrr-VVrrrr.

I rubbed my eyes and swiped it on. My phone had blown up with texts from friends and family wondering how we were doing. We are fine, thankfully.

Checking in online, I went to Facebook to hear about my friends and family. Then to Twitter. Oddly, the online world was living life as normal and I wanted to shut it down, shut it all down. I wasn’t and don’t feel sorry for myself. Not in the least: I am grateful to be alive and KEENLY AWARE that I am.

My muscles hurt from holding in the tension, trying to be strong. I feel like I’ve been holding up a sofa for days.

When I saw some of these tweets, from people all over the place, and mostly from people I don’t know, all I could think was this: You don’t understand, you don’t get it, you want to vapidly tweet about your coffee and your missing keys and halloween and shopping for shoes, and manicures and bikes and the election and what the hell to make for dinner and complain about your iPhone 5 and your cable service and tell me again and again and again (some of you people, get a clue…) to buy your frigging eastern european BDSM thriller eBook (which probably wasn’t edited and likely sucks) and ask about which shoes are best for babies who can’t sit up and are too young to walk, and tell me which GMO foods to avoid when there are people who are dead, dying, terrified, homeless, overwhelmed, sad, lost, bankrupt, sick… I can’t take it today. I just can’t.

A surveillance camera captures flooding in a PATH station in Hoboken, N.J., shortly before 9:30 p.m. on Monday. ©NBC News.

So when someone innocently and appropriately tweeted about whether she should blog I thought, kindly and sincerely “yes, go ahead because the world goes on and this is how life is.” I get it.

But me…? I’m more than just a little hungover here. I feel more like how one does after a wedding rather than after Christmas. All the preparation, planning, keeping in touch with family, trying to stay UPbeat for the kids:

Children must always be as children are. I love this little girl’s spirit. ©NBC News

(swear alert) The fact that this motherfucker of a storm killed several dozens of people and devastated coastlines has sorta taken a toll on me — given me perspective to not really give a crap about what anyone else is tweeting about other than the concern and consideration for the people devastated: 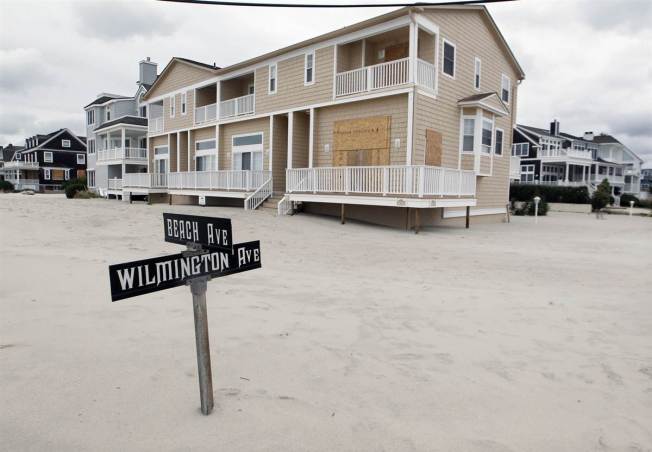 This is a street sign. You know, the ones that are 9′ high? Yeah, one of those.

And undying gratitude for being still alive and for the power line workers:

These people are badasses. I don’t wanna hear ANYONE complain that they took too long. GET OVER YOURSELVES.

Go ahead and tweet pictures of your cappuccinos and blog about your rage against your neighbor who won’t pull in his trash cans.  But don’t expect me to empathize. Not today. And you know what… probably not ever.

Not yet…? How about for the people who lost one of those 50 homes in the fires in Queens, NY? How about now?