this is inspired – it’s a great piece, a short one and a cogent dissection of the irony of the two-party system in a country with six presidential candidates.

Ok, Tuesday Morning Press #3 here. The rule for this post is there are no rules, except that I really can’t edit much other than ridiculous typos and phrases that make no sense. It’s all off the cuff – if I go astray, I need to get myself back on track.

So I’ve got less than my usual hour here because I walked with a friend back toward her house after dropping the kids and then I made the fatal error of staring at the sun come through the trees and then I went on facebook, which in the chronology of fatal errors was only #3, but in the aspect of its time suckage, was like error number -289.

I went on a field trip with Thing 2 yesterday. He is 11 and an apple of a child: heart-shaped face, copper eyes and a smile that sends a smile along my spine. He is tempestuous, smart and occasionally insecure and was genuinely T-H-R-I-L-L-E-D I was along on the trip.

Here’s the thing I don’t seem to have happening in my life yet: my kids aren’t embarrassed of me. They actually like me being around them and their friends. They want me to meet their friends. As in last Friday Thing 1 went to a couple social events at school which was so great for him and I was so excited for him that I wasn’t going to do what I wanted to do: stalk him and hang around. I didn’t do this because he’s got 1) a great head on his shoulders and isn’t easily swayed by moronic peer-pressure behavior … YET, and 2) I really wanted to sit on my butt at home on my couch and watch “Law & Order” reruns.

Before we went he said, “Come with me, you can meet Javier and Katarina and Hagar” and I loudly thought, “WHAT?! when I was your age I wanted to hide my mother in a laundry bin and feed her sunlight through a tube.” But I didn’t say that… I said, “No, thanks though! I will meet them another time… this is your time…” and he sorta looked downcast. Did I blow it? He ended up staying later for the game, which was great, but I didn’t make any plans to meet anyone there so I went home. Because he went and stayed, he was invited to a “we aren’t going to homecoming so we’re just gonna have a party instead” party at a friend’s house the next night and HE WENT! The parents were home and we called to see if there was anything we could bring… (hint: do this – your kids can’t get all ruffled when you offer to do what any normal guest would do – and you get to chat with the parents about the plans for the event and get a feel for the vibe). He had a nice time and is generally pleased with himself that he opened his social windows a bit.

This was supposed to be about my other son’s field trip. Get back on track… 40 minutes to go…

So this field trip was at a place called “Camp Hemlock” or “Hemlock Camp” or “Camp Camp” – I can’t remember but it doesn’t matter. The entire campground is all about problem solving and team work. This experience excelled for the kids by way of having them solve physically and mentally challenging exercises and experiences to arrive at a team conclusion where everyone wins. Think of it like “Survivor” for kids and within a six-hour timeframe. T2’s team, like all the others, was about 13-kids large and it seemed random enough to me until I noticed some of the teams were all the jocks and then all the smarties and then the kiddos who are normally normal: fit in everywhere and nowhere. The middle zone.

So much for stretching our envelopes. ANYway…

The duty of the chaperones was quite simple: 1) stay off your phones, 2) don’t assist the kids, 3) make sure rocks stay on the ground and branches stay off the path. That was A-OK with me. I had a great time with our other chaperone; I have known this person from very cheap seats for a few years as our kids have been in and out with the same teachers for a few years but I got to know her on a level that was almost cosmic and almost fate-granted. (Well, all of life is fate-granted –even the stuff we don’t like– we just have to be willing to accept it as such.) I made a new friend who is quite funny, has her own stories of how life has shaped her and we felt safe with each other. The best part of chaperoning: when you think you’re the only one who has a seven-fingered great uncle grandmother who ate pickled chocolate babies using a grapefruit spoon out of a beer stein while dressed in a Groucho Marx suit sitting in a chaise lounge atop the widow’s walk of the family compound’s main manor overlooking the Galapagos: you’re not alone. Everyone’s got a story.

The best part of the field trip was undoubtedly the zip line. To get to it after we donned our super sexy climber’s helmet and bladder tickling climbing harness we had to scale a 12′ rail-less stepladder and then get buckled in to more gear that somehow makes you feel like you could swing from a flaming helicopter as Tom Cruise’s next stand-in (he’d have to grow out his hair for me because there’s no way I’m cutting mine) in his next fairy-tale inspired action flick: “Rapunzel and the Pусская мафия (Russian Mob)” or the working title: “Blonds Prefer Death.” 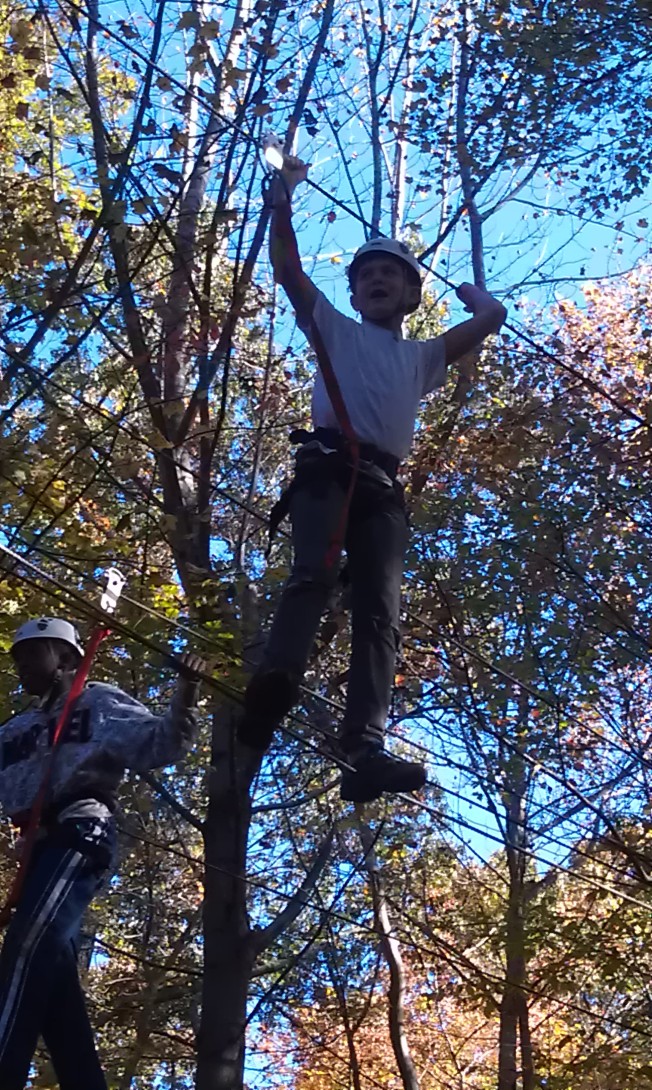 Brave boy. My love: Thing 2 walking like a squirrel 15′ above the ground.

Then we walked across a tight-wire which started at 10′ off the ground but ended up about 15′ and then the zip line which began above a precipitous drop into a valley which sank to about 75′-80′ below the line, but the line is horizontal, it doesn’t drop. So I got across, got strapped into more lines and other gear and then sat down on the ledge above the valley and nudged myself into the abyss. Despite the description of the cables being the same as those used on aircraft carriers to stop jets when they land, I still thought for less than a second: “this shit’s gonna break and I’m gonna bounce off that bank and roll into that valley” but I was overcome with wonderful confidence because 11 little kids, including my own son, had vaulted themselves into this ride and I went for it.

What happened next was just… SUPERAWESOMEGREAT. I was flying! Free and fast and by the time I screamed “I LOVE YOU THING 2!” it was over. Eight seconds max and I was at the other end, my knees bent and my heels were instinctively ready to absorb the expected impact of landing on the ground. “OH MAN! AGAIN! AGAIN!” is what I said. It was exhilarating. What do I want to do next? I think I’m ready for another ride. Maybe base jumping?

The trainer we worked with yesterday asked his team to come up with a movie which best described the day. For me, it was like “Steel Magnolias” because I made a friend and I just grabbed what the day had given me by the horns and didn’t look back. We have to do that for ourselves every once in a while: push our own envelopes because then we are freer, just a little bit.