It’s a bummer when the only ghost you (don’t) see on Friday the 13th is your waiter at a restaurant nearby a ghost tour in Leesburg, Va.

My 14-year-old son joined me, a friend and her daughter on a fun romp as amateur ghost hunters at Paxton Manor last night.

We thought we’d treat ourselves to a nice candlelit dinner before we barfed it up and ran for our lives out of the house.

Leesburg is a quaint Virginia town.  I’m not going to pretend to know much about its history other than it still harbors a grudge about that whole “War of Northern Aggression” thing. (Being a New Yorker at heart, I couldn’t care less about The Old Dominion’s loss of slavery.)  OK… a little history: Leesburg was established in 1758 after being settled in 1722 after resident Iriquois Indians “abandoned” (likely: had no choice) all lands east of the Blue Ridge mountains to the colony of Virginia (after all, muskets win all battles). It’s the Loudoun County seat (which means it’s the capital town of the county).  It is NOT named after R.E. Lee. (I just found that out!) because in 17blah blah it was surveyed by the owner, some dude named Nick Minor when the colonists wanted to create a county seat.  Mr. Minor had it apportioned into 70 lots and divided some to the east and the west and zzzznngnngnnnnzzznnnnng.  In 1758, some 100 years prior to the Civil War, it was named Leesburg. I still don’t know why.

In 1850, some 1,688 people called Leesburg home. I bet they had better service at the restaurant we went to then. Maybe their waiter was our waiter.  Anyone ever hear tale of “Cecily” the silent phantom waiter who takes your order and then … vaporizes? 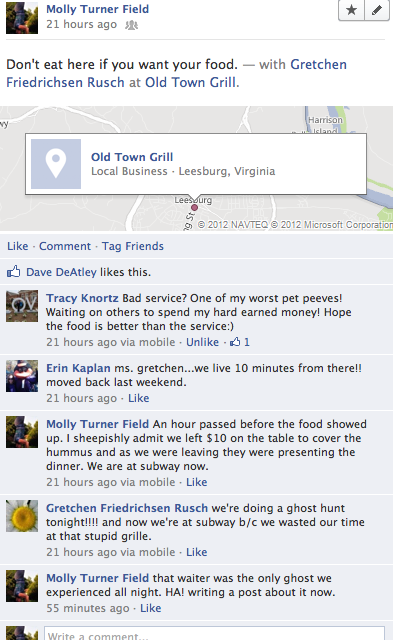 Once she told us the place was riddled with apparitions I no longer wondered if we were dressed appropriately. We were in our Ghost Hunting gear: ectoplasmic hoods and glasses, sample kits, magneto phaser guns for the kids, bow staffs and 16″ rapier knives for the moms and traps, jet packs, combat boots and nomex fire retardant jump suits.

Then Cecily appeared and lit our 14″ taper candle with her finger.  It was situated in the preternaturally in the center of our table thus completely obscuring the views between my friend’s daughter and me (lucky her) and my son and my friend. My friend’s daughter  and I often found ourselves leaning to the left or the right of the superfluous glow and eventually Cecily removed it.  Or did it simply… vanish? To the kitchen … where our food was made and apparently died.

“She was pale, Mom” my son commented this morning upon our recollection. No, I lie: he said it this afternoon after he woke up around 12:30.

At the super-creepy hour of 6:12 p.m., Cecily hovered above the wide-plank otherwise creaky pine floors and took our orders.  I should have been paying more attention when I handed her my menu and it fell to the floor.  Perhaps it was her lack of feet that also could have tipped me off.  In retrospect, I can now understand why I sucked last night as a ghost hunter. I didn’t know we had a phantasm waiter before us the whole time.

I ordered the special: seared chicken breast (how ghastly) topped with a ghoulish mushroom creme sauce atop of bed of tortured and steamed spinach. I also ordered some hummus and pita to whet the appetite. Nothing like a little garbanzo beans and olive oil frappe’d to oblivion to start the gastric juice flow.

There were three total tables (another four-top and a pair) seated last night including ours. Just wanna let you know that before you get too invested in this waitress’s feelings.

It turns out there must’ve been a run on pita in Leesburg yesterday, it being Friday the 13th an’ all (is it used in some sort of superstitious ritual?) because there was one slice of pita bread cut in to four triangles.  The hummus was garnished with oh… slivers or wafer-thin slices of green and red pepper. Perhaps they were spectral too… they were thin enough.  We ate those. We considered, in the hour and 10 minutes between placing our order and yes, I am not ashamed to admit: walking out the door (but leaving a $10 on the table for the slice of pita, scoop of hummus and diaphanous peppers) that perhaps we could even lick the plate for more protein.

“No, the hummus was crusty” said my friend, “by that point.”

I asked Cecily (I had to get out my ectoplasmic receiver to get her attention to do it and Thing 1 did that high notes on the piano trick he learned from “Ghostbusters” on the real non-prop piano they had on display to get her attention too) at about fifty-five minute post-order: “Uh, hi…Cecily…woohoo, over here… right. Wow you’re quick. Hey…  Do you have an ETA for us? We’re quite hungry.”

Cecily stared through me and droned, “They’re making the plates now, it should be any moment.”  Whoosh… she was gone.

And I thought, “Ok.  ‘Making the plates,’ what an odd turn of a phrase (unless you’re in 18th Century Leesburg!)” so I informed our party (after my friend returned from her fake trip to the bathroom to get an eye on what was going on back there in the kitchen!) that we were gonna nosh soon.  Maybe ten more minutes went by…

My friend said, “she should have told us the plates were in the kiln.” If I had food in my mouth at that time, I would have spit it out in laughter.

Our waters were refreshed.  Other people who arrived after us were also not fed, but I wonder what they thought as we plunked down our Union greenbacks and walked out the door like Julia Roberts in “Pretty Woman” (after meeting Richard Gere)… Look… before I lose both of you readers because I sound insensitive: I was a waiter at a large successful restaurant for two and a half years, I know how this goes: you check with the kitchen; you check in with your table, you keep them updated.  You offer to bring more table-spoon sized buns.  Apologize for the wait… offer more hummus…spectral peppers…

Hey man.  We had ghosts to catch.  So once we got into our hearse, we drove as a band of four hungry cats would through Leesburg because we were all an hour away from our respective homes. Anyone on the road at that point knows the meaning of Friday the 13th now.  Ultimately, the kids won and we went where all champions in America go: Subway.  I ordered my favorite: Chicken Bacon Ranch on 9-grain. Pepper jack. Toasted. Lettuce, tomatoes, banana peppers. Light on the sauce.  That’s a wrap.  Sour cream and onion baked Lays and a tall iced tea. T1 got the same.

We drove to the scary house’s parking lot and ate our sammies tailgate style. Once we were ready to rally with the people in charge, we submitted our waivers for indemnity and listened to a very brief lecture about what we were about to experience and how to use our cell phones as the ultimate ghost hunting tool. I am an entertainable skeptic.  I am a debunker.  I was ready to debunk.  I was all Will Smith in “Independence Day” about it.  Then I felt a very cool breeze in the 85˚ heat over my bare right shoulder as we listened to the head hunter (that came out wrong, but I won’t fix it because I like it – hey, my blog! — she was the chief) discuss the house and other aspects of our evening.  Then it was time…

I crossed myself, we went in and within the first five minutes we had the bejesus scared out of us because the house is also an historic property that has a hallowe’en haunted house every weekend in “ShOcktober” and they are preparing for the event now, some three months away.  The team that runs the haunted house also uses the proceeds to support a program for children with disabilities and all our cash from last night went to the same cause, so I was happy to support that program even though I urinated in my nomex jumpsuit.

So after we made the haunted house team feel good about itself and the work it does each October, we were let loose.  The foursome from the phantom Cecily’s dinner table made up our own team.  We did some sleuthing and it was a little creepy, especially with all the fun-house maze structures and “false walls” (weirdest term I’ve ever heard – I mean: a wall is a wall; nothing false about it) and fake blood and guts stuff for the annual event.

There is a vault room that Mrs. Paxton had: it was a large walk-in closet with a huge steel safe that hasn’t been opened since she lived there. I wonder if our food was in it. Maybe the plates were. Anyway…  there were moments of odd sounds on the digital recorders, some funky things, orbs, showing up in photos and sensations of heaviness in the bathrooms and that was enough for me and T1.  Around 10:45, he said he was ready to leave and I was staring down the barrel of an hour-long drive east so we found the nearest window and jumped out of it.

Once we exited the house (they laid a line of kosher salt outside the doorway) he and I walked to my car.

Oh, and my car, my freakin’ awesome 2004 Toyota Sequoia (which you learned last week needs 12″ of clearance over a septic pipe) has this cool feature.  I don’t know what it’s called, but you don’t have to hold the key to start the engine.  You just turn the key quickly, release it and it goes.  I guess it’s a way to enable all we insane 4×4 soccer moms to peel out of the muck to get to 7-Eleven as fast as possible.

Last night, that feature didn’t work.  It worked before we got there. I unlocked the doors from a mile away and we coolly walked to the car.  I sat in my seat and centered myself. I said to myself, “Self: pay attention to this moment.  Center and relax.” I turned the key and the Sequoia didn’t quite start as it normally does on first attempt at 11:02 to leave.  It started and then… it stopped.  It went like this (all you mechanics out there will love this): WrrrruMmmmm! *cut off.* Me: lock doors (because you know ghosts can’t get through locked doors). “Hey, bud, you got your seat belt on?” I asked my son as sing-songy as possible.  He said yes.  I put mine on.  Waited a sec.  Turned the key and it started and it stayed on.  I said a quick Hail Mary and shifted into drive and we left.  In my many years of owning that vehicle, it has *never* done that to me.

We pulled into our driveway about 50 minutes later, after some really nice chats about the night, our experiences and beliefs, a little wired but no worse for the wear.  He watched an episode of Seinfeld and I took a melatonin and hit the sheets.

I guess the only bad luck about the last Friday the 13th for the next 13 months is that we had bad service at the restaurant.