It’s me, Charlie, the puppy here at the human’s house. Today, the lady gave me a bath. She was all alone or there would be humiliating photos of me with suds on my face and me sitting in the kitchen sink (i peed in it just to get back at her) looking like a wet rat.

Instead, she waited until the towel she put on me could hold no more water and took me outside for a picture. Here I am looking like an electrocuted wet rat: 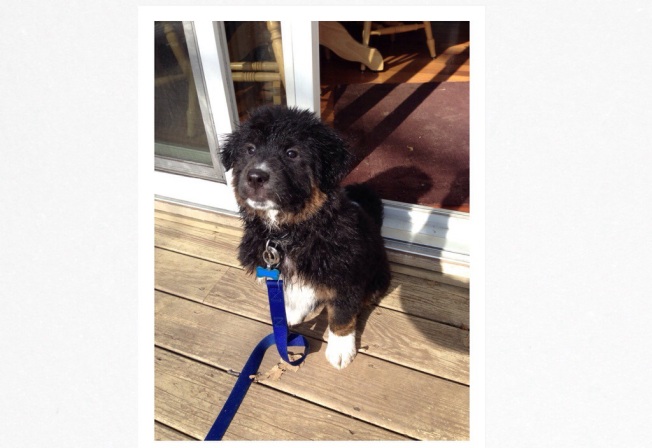 She gave me the bath because I experienced the misfortune of placing my head under Murphy’s penis while he watered a plant this morning on our walk. It was my fault, I own it completely, but I did not like the bath. I did not think I smelled that bad. When the lady gave me a bath, I made sure that her shirt got very wet and that she got very cold because she ignored my dagger fangs on her wrist and my calls to any nearby wolves to release me. Serves her right. The lady kept on giving me treats while she scrubbed me; she thinks that will eventually make me like baths.

Murphy said to just go along with it because the suds, the treats and the massaging are excellent.

This is Murphy, he is very cool: 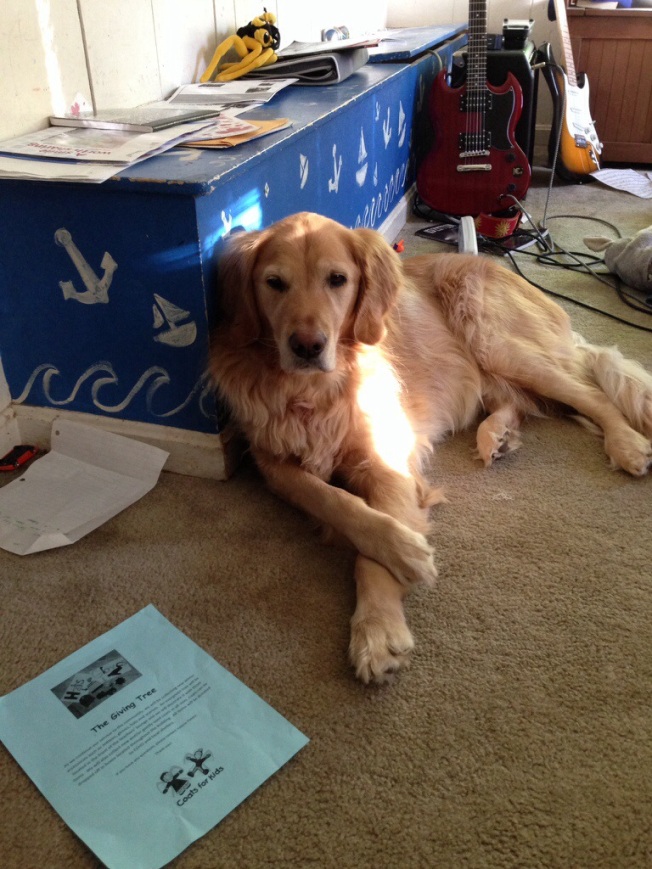 He plays guitar with his tail.

When I run around this house and I try to steer, my feet slide on the floor and I slam into things at full speed. My fluffy hairs do not provide traction. The humans make sounds like they are having trouble breathing whenever this happens.

About four weeks ago, I was rescued from a hole in the ground in South Carolina. The lady and the man who have brought me here to run their home said that they did not plan on bringing me here at all but that the man saw a picture of me where I fell asleep in my food and he had to have me.

I do not know why this picture is what did it. I think I look like an idiot. I am embarrassed by this image; I have no self control.

I like this one better where I’m super cute. I was faking sleeping:

But “people are stupid; there’s no accounting for taste,” says Murphy. He is cool, so I believe him. He lets me knit with his tail hair. I know he likes it because he moans when I do it.

Since coming here, I have taught these humans how to do chores properly. No one understood the point of a dishwasher. I do.

It took many days for Murphy to warm up to me being his boss. He tries to act all big and 83 pounds, but we know that’s just a phase. The lady was so sad when he succumbed to my authority, she spoke into a small plastic box and shouted into it, “They’re getting along! They’re playing!” I do not think she understood what was going on. I was not playing. I was having a private meeting with Murphy expressing my domination; I have determined that hypnosis is best. Look into my eyes… You will do what I want…

I feel this photo is like one of those sensitive moments captured by White House photographers when JFK was in the middle of the Bay of Pigs crisis. Why did he not like the idea of a bay of pigs? Mud and bacon. What is not to like?

The lady tells Murphy not to drink from the white bowl in the small room. She growls in a stupid way, it sounds nothing like a dog. Murphy laughs at her and does it anyway. Here he is teaching me how it’s done. I can not reach the bowl. One day I will. She says, “Charlie, do not pick up that habit.”

Instead, I picked up this habit while I wait to get tall:

Here is Murphy pretending he is the boss:

On second thought, he looks very scary there. I will remember this picture. He does not like it when I try to eat his food when he is eating it. The lady feeds me last. That is mean. She says something like, “You are not alpha. I am alpha. Murphy is above you. You are Mu or Sigma….” Mu. That is stupid. But I try anyway. 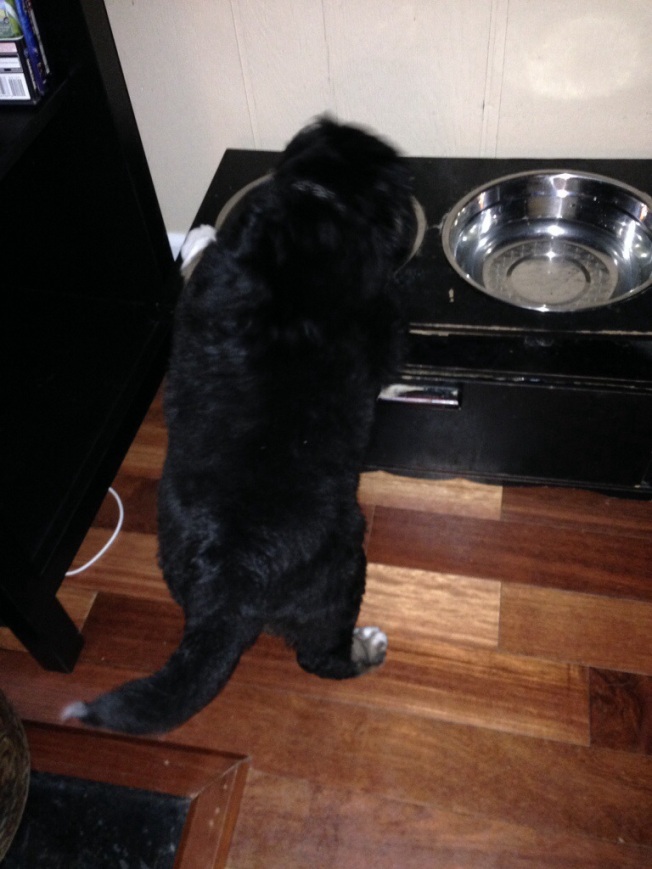 It snowed here a couple weeks ago. I had a great time sitting on Murphy in it. 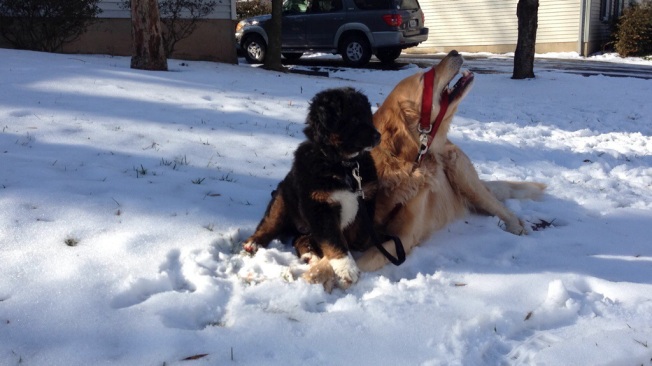 I am doing well. My mom, brother and sisters are living nearby. When the weather warms up, we will get together and have fun, the lady says. I have put on almost eight pounds since living here. Every time I wake up from a nap, a boy here says I have gotten bigger.

This is me, about to take a nap, so I can grow: 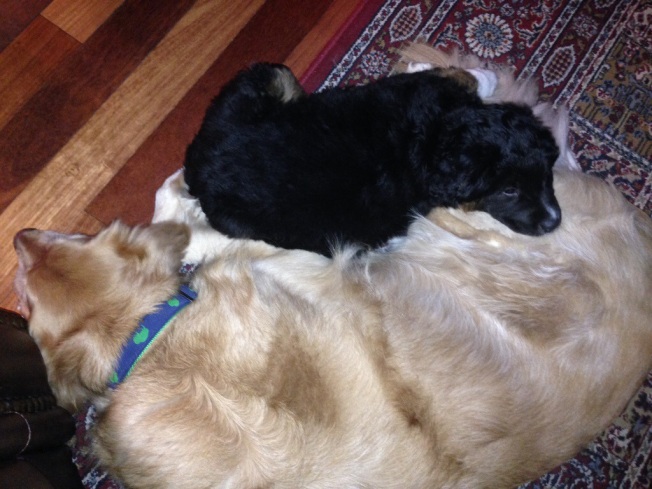 I have gotten the lady to do tricks; every time I sit down, I get her to use a clicker and then she gives me a treat and pats me on the face. She also does this when I decide to lie down and I have just started to go after things and then leave them alone and I get her to give me a treat. She also gives me one for taking a nap in my box. She is stupid.

I got a treat for this:

She keeps saying, “STAY. STAY… STAAAAAY.” I do nothing, and then I get her to give me a treat. Humans. They are so easily trained.

I like to think of this place as my toilet. The lady does not like that, so she has started to feed me off the floor. 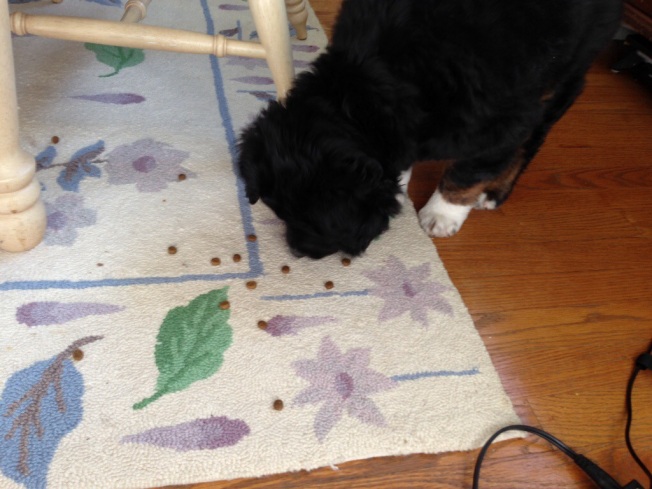 Now I do not want to pee there so much anymore. But sometimes I forget. So now, she “wears” me by attaching herself to me wherever we go. It is funny, I never thought she would want to go where I get her to go.

I am glad I do not live in a hole in South Carolina.