Last weekend, my eldest and I drove off to my home state, New York, to tour Rochester Institute of Technology. He is a high school senior, and swinging by Rochester from my cousin’s house in Buffalo, where I grew up, was really no big deal. Except that it was.

My son, as it turns out, loved the school. It’s eight hours away by car.

“We really haven’t looked at any bad schools, Mom, so, it would figure that RIT would be great too.”

Astute. It’s a goal of mine to not waste any time and show him any “bad” schools… I mean, who would do that?

Watching him grow up, is a mixed bag.

I find it hard to stay in my lane.

Let me be clear: my son is not in need of a couch; I’m simply stating that when I engage with someone these days, I am finding that I still need to get the hell out of their lane and stay in my own: not make anything they’re saying about me. Keep the streams uncrossed.

My son is embarking on new chapters and it has nothing to do with me.

Keeping these posts, these essays relevant to him, because he is a human on this planet, makes for interesting story telling, but keeping these posts about me and my growth and not divulging too much about him and his brothers or his father or anyone else, is always my goal. I have to sit back, read and then ask about the relevance of content as my own editor and do my best to ensure the posts are mostly expressive of my seat and perspective in the shared experiences.

It’s nearly impossible to relate to life as a mother, a caring person on this planet and an empathetic person without relating to others. So I find myself softening the crayon strokes as I near the edges of what I’m coloring.

Given the alignment of American tradition / history, he will be gone and in some dorm in ten months and I will have to absolutely let go, as he turns from his gentle wave goodbye as I turn my body forward from craning over the back seats and pressing my face against the tailgate window only to leave him there. Maybe I will put his “Momo” — a stuffed baby cow he was given as a toy when he was born (I took Momo to Vegas with me) into a sock and he will find her and smile.

I write about him more than the other two boys these days because he has a lot going on. He’s not more important, he’s not more valuable.

He’s my first. He’s my first true teacher of humility, of the dangers of narcissistic extension, of fear and its sneaky cousins: denial and self-sabotage.

Last week when we were in Buffalo, my cousin threw me a birthday party. I’m 48 now. My life is more than half over, as I have no intentions of living to 100, drooling, having my kids wipe my undercarriage and repeatedly asking people to repeat themselves. Those are my intentions… we will see what fate delivers, always, of course.

At the party, I was speaking to someone about age, having kids and the biggest gift of all, the true honor and privilege it is to write, “xo, Mom” at the end of a quick note or text.

I said, “If you were to tell me 25 years ago that I were going to be married, with three sons and everything else I’ve been blessed with, I’dve told you to walk. Writing ‘xo, Mom’ on a note has been my greatest honor ever; words fail to express the journey and its gifts wrapped in lessons.”

So I see him, with his hairy man legs and hear his deep voice and his sharp observations, and words come back to me that a friend recently said of her own experiences watching her son grow up: “Suddenly, there is another man in your house. The step is heavier, the pace is slower, the tone more deliberate and the entire vibe doesn’t so much change because he’s not a ‘man’; he’s your kid who likely needs to tie his shoe or tuck in his shirt to you, but there he is nonetheless: a man.”

And you’re that much older.

So the adjustment must be made. I guess it’s only natural to still treat your child like a child, but sooner or later, you have to look at them as they have always been: separate and individual and capable of their own triumphs and disasters and no matter how deep the desire to meddle, parents can only set up their children for coping with the consequences of their choices. We can’t do anything else… ever.

And it sucks, I think.

We can’t make people be nice to them and see them for the fantastic people we believe them to be. We also can’t be so blind to their humanity that we deny their flaws. That’s the worst thing we can do: pretend they are perfect.

So, as my friend continued about her own college drop-off experience, “I heard the landing gear lock in when the jet cleared the runway, and all I could do was breathe and try to deal with the onslaught of doubts: Eighteen years… did we hug enough? Did I speak kindly enough? Was I patient enough? Did I tell him ‘I love you’ enough? Did I play enough with him under the dining room table? Did we have enough heart-to-heart talks? Did I show him how his choices affect him? Did I tell him enough about the dangers of peer pressure? …”

And I hear my own thoughts compete with hers, Did I instruct him about changing a tire? What about the allure of self-pity and trap falls of despair? About the value of hard lessons? Have I taught him about resilience? Egad! Does he even know how to cut an apple? Make lasagna? HE DOESN’T KNOW HOW TO MAKE LASAGNA!!! I’VE BEEN AFTER HIM FOR YEARS TO MAKE LASAGNA WITH ME…sauce noodle goo … sauce noodle goo …

I still have time. I know he’s going to really want to spend time with me now… at 17. There’s nothing cooler than spending the weekend with your mom while she teaches you how to make lasagna. I know that’s at the top of his list of things to do before heading off to wherever is next.

While we were in Buffalo, he went off for a walk with his cousins. Soon after that, the cake came out and it was time to sing to me.

But I knew he was out.

I was at an impasse… Do I call him back? Do I interrupt his “me time” for my “me” time?

I felt strongly that I knew what my mother would do: she would interrupt him. She would call him in to gather round her with the upcoming generation and venerate her with song.

I decided to wait a few more moments to see if he would come in on his own.

So I did what I thought was only fair. I decided to let him know, because in my own twisted (yet I’m working to untwist it) and fearful mind, I would have thrust at my mother also a vengeance that she purposely didn’t tell me so that she could thrust guilt at me and I could summarily thrust shame at myself: 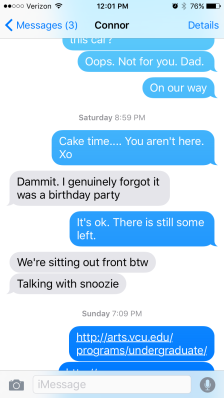 So while I sat there, letting everyone sing to me, which was really nice an’ all, I was quite aware of his absence. And I was aware of my awareness, so I took a breath and let it all go.

And at some point, as aware we are of our children’s maturity and individuation, we must also allow our parents their past and realize that we are our own separate adults now and that they don’t have reign over us anymore, for good. That we don’t have much time left, even in the best of circumstances to live our lives. So, yeah… pull up our own bootstraps.

He came in later, and after everyone was gone, he sang “Happy Birthday” to me all alone. He sang every verse. Even the “dear Mommy” part, looking at me right into my green welling-up eyes and smiling, completely void of any irony, weirdness, or self-consciousness.

And I sighed, hugged him deeply, almost cravenly, and I softly wept a little because he’s so sweet, and thought to myself, “Just one more year…”

This is all we get.

Note to self: stash Momo in a sock.