Welcome to Day 19 of my blog series based on Judith Hansen-Lasater’s “A Year of Living Your Yoga.”

I will try to keep these posts to less than 500 words once we start the quote.

Here is the quote:

August 28 — The emotions of daily life are the stuff of our transformations. Spend today observing your emotions; irritation, boredom, anxiety. Let them rise and fall and remember, you are not your feelings. They offer you insight into yourself, that’s all. Let them go.

When I first began therapy, I was shown one of those charts that displayed various states of emotion: 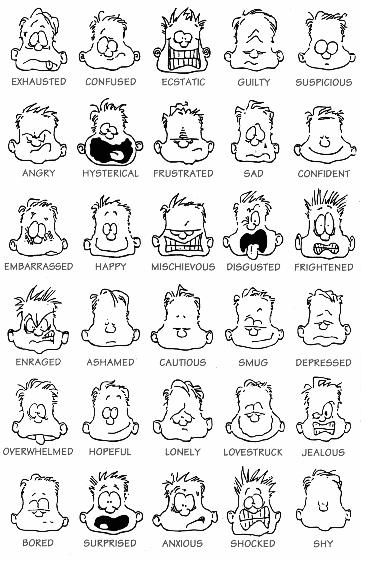 i had two known: angry and hysterical.

I had to find myself in there before I began each session. I had the words down — remember, I’m a writer. I can explain anything, but to feel it? Not so fast.

I grabbed one of those charts off the internet and sealed it with packing tape for safekeeping in my wallet.

As time wore on, I didn’t need to cite the chart so much, because I remembered what the faces looked like and I began to feel, legitimately, the swings and various depths and states of those differing emotions. When I was jealous, I owned it. When I was delighted! (I don’t think that’s on the chart; if I were to blend emotions, it would be happy and confident) I enjoyed it. And each time, the emotions neutralized, especially the negative ones.

So that was the beginning of the journey of “you are not your feelings.”

And you know what?

Even if I’m deliriously happy, I am not my emotions — I don’t have to stay there. I don’t have to worry about the descent back down to earth because it will happen. I just buckle in and enjoy the ride: experience the moments.

I think about my years in Spanish class, how when we expressed an emotion in Spanish, we said, “estoy triste” or “estoy feliz” which means “I am sad” or “I am happy,” respectively. But in Spanish, the emotion is expressed as an ephemeral, impermanent state. It’s the use of “estoy” which is the temporary tense of “I am” and that’s so much nicer. When you want to say you’re hungry in Spanish, you say, “tengo hambre” which translates to “I have hunger,” which is really more correct and accurate. (If you were actual sadness, the emotion, you would say “soy triste” as “soy” is the permanent state, as in “soy zurdo” / “I am left-handed.”)

But in English, when we say “You’re so happy!” or “You’re so angry!” it’s really a limiting expression for both the giver and the receiver of the sentiment. It’s one of those all-or-nothing traps again, like the one I expressed in sidebar of the post I wrote the other day; it makes the receiver feel branded (not simply judged) and the expresser is … sort of sounding limited. Likely because s/he is limited. Maybe what s/he is trying to say is “I love being around you when you’re happy like this; it lifts me up!” or “I’m terrified of you when you’re angry like this; I want to hide…” but saying stuff like that requires vulnerability (emotion) and that might be frightening, so we end up stuck in dysfunction and then tack on: guilt.

We can’t save the world. The best thing we can all do is express how we are actually feeling in that moment and to move on.

I’ve had some crazy bad news lately. When I heard it, I was sucked into a vortex of “OH NO NOT AGAIN” but even then, I breathed and knew that I would be OK because the emotion was a reaction and the state would pass.

we’ve all been there.

We have no choice. We have to rally. We see that quarter-sized fringe remaining on the roll and we deflate. Then we become frustrated and inventive and we have to deal. We just do. Learn about yourself; take it as an opportunity to ask yourself, “why am I reacting this way?”

So think of your emotions (especially the dark ones) as being stuck in the bathroom with a wisp of toilet paper.

They too shall pass.