Sorry about yesterday. I had to go do some other things. Plus it seemed as good a time as any to take a break. My friend PMH though said I was leaving her on a cliffhanger. Yikes!

Ok, so I left off where Annie and Mandi prepare to go to South Carolina to check out the site where “Mini” (the now milk–engorged postpartum dog mom) was first seen and rescued from, with the best of intentions of NOT abandoning a brood of puppies. I mean, c’mon… who would do that?!

Annie and Mandi left on Friday, January 3 around 11am from their hometown, which was about 7 hours away from where Mini was found. They had to leave so late in the day because these two women also have humans to feed and care for. They also weren’t sure about whether there were puppies, so once that got that all figured out, Annie felt it was ok to go. She got her blessing from her husband, who supplied her with a couple flashlights and love and Mindi packed some leashes and her cat carrier, which basically ended up just taking up vital space in the car…

This was up to her; this was her program.

Hold up: it’s winter. I live on the east coast. At 5:30pm now the sun is setting. So uh, check: it was dark out when they got there. Props to Annie’s husband for packing the flashlights, they were essential.

“So yes, we got there in the dark. I pulled up to the gas station, I parked the car. I opened my door. Mini was on a leash and I jumped out. I had my cell phone, luckily. By the time Mandi had gotten out of her seat, Mini took off running, full speed, milk and all, and the leash was trailing behind her,” Annie said.

Annie explained with a fair amount of humor that she is not a runner. So every time Mini felt Annie couldn’t keep up (in the dark, through unknown territory, with only two feet thank you), the dog would slow down, sit and be submissive, sort of showing her belly and saying, “we don’t have to go.”

“But I was not stopping! I wanted her to keep going, so I egged her on, waving my arms and gesturing ‘Let’s go!’ hoping Mini would start up again. It’s at a point where I’m trying to convince her to run! The first thing she does is run out of the parking lot and dashes into a really busy street — at night! Cars were everywhere. To me, this was crazy — I mean, I had to keep her going because if she didn’t, she would stop and we wouldn’t find the babies.”

After Annie and Mini cleared the busy street with the cars in the dark, they ran across a darkened field. “It was totally random, like its existence didn’t make any sense.” Seemingly in the middle of nowhere, but certainly in the dark, so there was no real possibility of context, the field was a mess. It had bumps and cracks and puddles and overgrown weeds, and random plants in it. It’s cold out too. “So we were running through this field and ran into another field? I’m not even sure at this point where we were. My car was still at the gas station, I guess with Mandi, but Mandi is nowhere near me; she can’t find me anymore.”

So these two moms. Suburban, educated, modern, progressive women from the outskirts of the Nation’s Capital, are in the boondocks of South Carolina in the dark, early days of winter; three days before the landfall of some of the coldest, subfreezing temperatures this area has ever seen in recorded history, with a lactating dog who was two days absent from her babies leading the way to her litter.

“The next thing I know, we’re at a trailer. All of its lights are on, and then we pass the trailer and I think go through another field. And then, there was this house. Half of it had fallen down. And Mini, she just ran into this hole; >poof!< she was gone… I think, ‘Where has she gone? What’s going on?’ and then I hear them. Their howling and greeting and screaming for their mother. So to get a better view [into a darkened abandoned tear down in the middle of nowhere, Annie lies down on her chest] and I’m on my cell phone to Mandi at this point and I’m screaming into it, ‘THERE ARE PUPPIES! THERE ARE PUPPIES!’ and I see two little black shapes come up to Mini in the hole,” Annie says, now pausing to catch her breath because the emotion is coming back to her, the moment is as real as if it was happening right now.

“It was …. I can’t even tell you how I felt when I saw and heard them all. It was like … like … having a child. The most wonderful, amazing moment of my life.”

I know I’dve passed out just to know that they were all still there and all still alive. Relief would be an understatement.

To any human mothers, all too aware of what it must be like to know that you’ve been separated from your babies and your milk is coming in and won’t stop because you’re still waiting for your child to nurse, and the child can’t because the child is separated … to feed that baby… Annie and Mandi rejoiced. They screamed to the sky with gratitude, amazement and exhilaration.

The next plan would be, how to get these guys out of the hole?

Looking back on that crazy run through the fields and the random-seeming parks, “I have to say… when I was running through that second field on the approach to the tear-down where they all were, there was a really scary-sounding dog barking at me and Mini.” She was pretty terrified.

If it were me, I’d have to put a lot of faith in it all just working out. Annie was committed. “So this dog sounded really scary but I just kept going,” she said.

The house where they were was really unsafe. 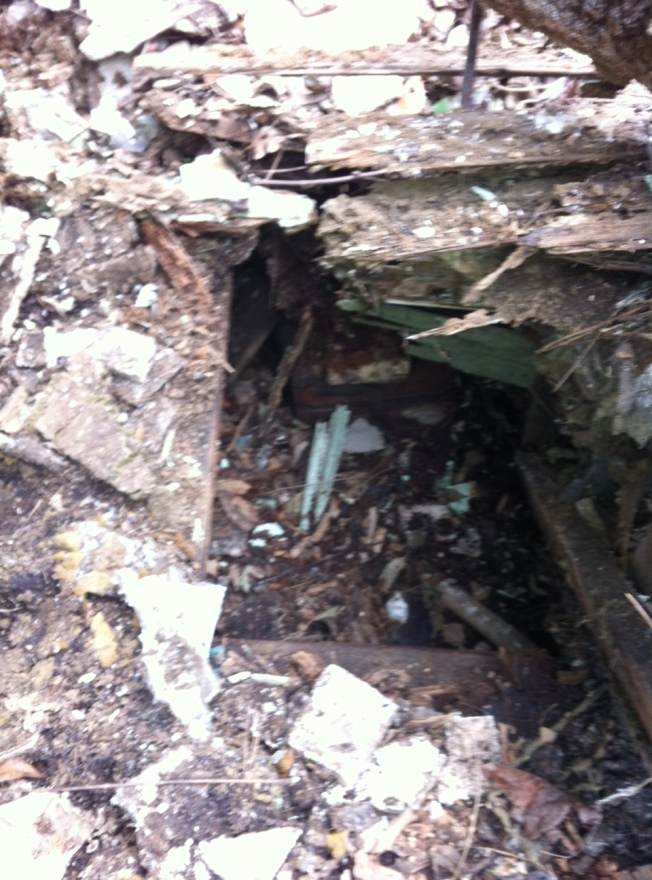 this is where they were found.

We all have experiences of walking up the basement steps after spooking out ourselves with a scary movie or a weird thought of someone being behind us. We all know how unknown territory and the dark can turn our imaginations up to 11 in no time. We all know how running through a deserted field amidst tear downs and abandoned trailer homes after running through traffic after a dog we’ve just met can get ahold of your thoughts and make things substantially different than the reality, right?

Turns out this was who was barking at Annie so fiercely and angrily that night: 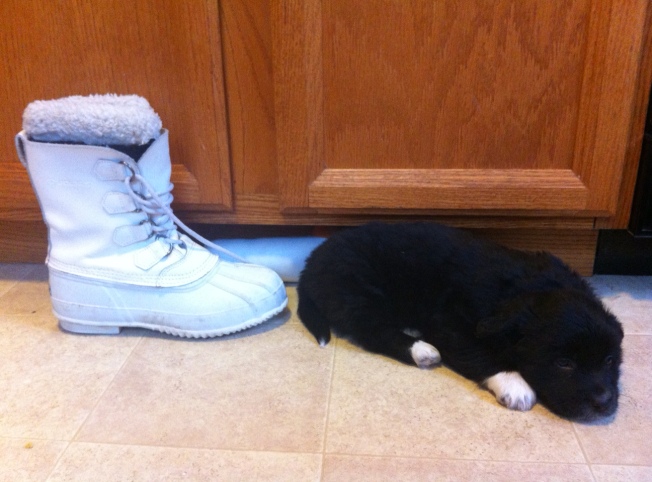 the one on the right. his name is “freckles” as in “freckles the fearsome.”

So after that point, Charlie (my pup) and Tip, a female, come out of the hole totally happy with their tails wagging; basically saying, “HI. I LOVE YOU. I TRUST YOU COMPLETELY.” Because Charlie is so much bigger than his sibs (which makes me think he was something of a pig in the litter…) Annie left him where he was because he could follow Mini wherever she went to nurse and get milk. “I decided to hold Tip because she was so small and she couldn’t keep up, and she’d cry, so I just held her.”

At this point it was still just Annie. She didn’t want to leave the dogs and it took about a half-hour to get Mandi to find her through directions as best as Annie could explain them to her. Annie could see landmarks of strip malls and fast-food places, but she couldn’t exactly say where she was because… she didn’t know where she was. So yes, the gal who had all the leashes and the cat carrier was nowhere near where the dogs were. It’s ok… it just makes the story more interesting.

“So I started to get a little freaked out, frankly. I realized that I was on somebody’s property. This was someone’s house, so I didn’t want to get in trouble and I didn’t know where I was and I was scared, so I decided to go up to the trailer with all the lights on, and knock on the door to see if I could find out how to get Mandi to me. I was still on the phone with her, so I felt that was sort of safe, but … I don’t know. We were imagining shot guns and you know, it’s South Carolina… ”

I’m not sure what that means, but moving on. I was thinking as I was listening to her not so much that it was South Carolina, but that it was an empty and deserted field with an abandoned teardown and a few trailer homes nearby. I would be lying if I didn’t think banjos and meth labs.

By this point when Annie is telling me this story, I’m slack-jawed. I like to think of myself as brave. As someone who is willing to take the extra step, do the kinder thing regardless of whether it pains me; as long as it will work out, what’s a little discomfort, right? But I can’t say I’d do this. I can’t say I’dve picked up Mini in the first place. I can’t say I wouldn’t have though. I’ve been in the market for a friend for Murphy for about a year; more intensely in the last six months. I know that soon he’ll be getting older and so the odds of a puppy or younger dog developing a positive relationship with Murphy in a space beyond two years is pretty nil. But I do know this: if I picked up a dog who started lactating and I had her examined and it looked like she’d had a litter recently, you can bet your ass I’d be back down to where I found her to help reunite and rescue them all. To do anything else, with the upcoming freeze-mageddon awaiting, yeah. I’d go back down there.

“So I walk up to this house and it turned out to be this super nice lady. She’s Mexican, I’m Cuban, and so we both speak Spanish. Instantly, we feel at ease with each other. This woman, who lives in a trailer all by herself and who has nothing — I mean: nothing, has been putting out her leftover rice and tortillas for Mini. She was glad to see me, she knew I was coming for the puppies and she was all for it and because of her, I’m able to navigate Mandi to me. The woman goes on to tell me this story of another trailer which was in even worse condition than the teardown where Mini returned to which was where Mini and another dog were kept and basically left to fend for themselves because their previous owners didn’t take them with them. The dogs were abandoned about two months ago, about the time when Mini delivered the pups,” Annie continued.

So Mandi found Annie and with the neighbor woman’s nod, they took the two first pups and put them in the trunk of the car (don’t worry, it was a hatchback) while they went back looking for the other puppies and Mini.

“When I got to the car, I realized that it was 28˚ outside. In South Carolina,” Annie said.

This seems like another good spot for a break. Come back tomorrow for I think what will be the final installment on this little Puppy Saga.