A goose shits every 17 minutes, thus giving credence to the phrase, “like shit through a goose” when speaking of the speed of a process or reaction.

Monday I wrote this post about my walk with Murphy in the hood. It was a gorgeous morning, and then it rained for almost two straight days.

I took pictures of the baby geese, the parents of whom rightly gave my dog a total rash for his insolence in wanting to place them all in his mouth. 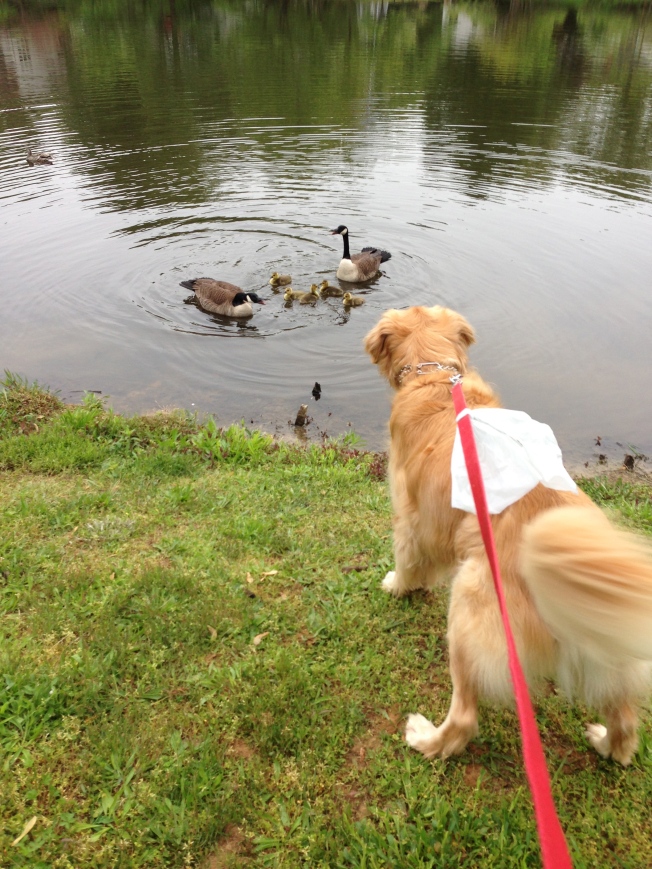 really? say that on the grass, geese. i will chase you back into the water and laugh when you can’t hiss back on me on this grass. here. THIS grass. Woof.

As you can likely predict: Murphy really could not be less impressed by the geese. He didn’t think they were cute; he likely didn’t even think they were assholes, like I did. He didn’t think. That’s the brilliance of this animal: it’s all instinct and he’s not one tiny bit interested in how I feel about the geese. He just wants to put them all in his mouth. And the baby geese? They will remember him and his teeth because the memory is now imprinted.

Murph doesn’t care that I don’t have a gun or that they didn’t fall out of the sky. Almost every day, we see the geese at the ponds, and I can’t tell if he loves seeing them and tugging at the leash and wanting to put them in his mouth, or if he hates it. But I can tell you this: after each time we see them and we walk away, he does this, “that was cool, can we do it again?” face and rubs his nose into my left thigh. He’s the best dog ever.

So yeah: I hate the Canada geese here. We used to have lots of ducks, but they ran away because the geese are like the mafia, the Gambinos of geese.

Here is my one request: Don’t Feed the Geese, wherever WHEREVER you are. Here’s why as I just posted on my Facebook page:

a quick comment (lecture) about the adorability of baby geese and our responsibility as members of this planet: DON’T FEED THE GEESE. here’s why: geese are dumb-ass stupid birds. they don’t know the difference between me and Ronald McDonald.

so, when say, Ronald feeds them, they expect me to feed them, which of course i won’t because i can’t stand them. why can’t i stand them? because aside from being stupider than hell, they are also nasty and aggressive and dangerous and they shit everywhere.

a few years ago, a toddler in this neighborhood was disfigured and maimed (lost part of his tiny finger) because his mother looked away to get more freakin’ bread crumbs out of her bag. the goose was all, “faster! faster small Ronald McDonald!” and the toddler was all, “what’s up goose? i will try to put my fingers in your eyes…” and the goose was all, “i don’t smell no bread coming from you small Ronald McDonald, is your finger bread or are you trying to put your finger in my eyes?” and so the kid was bitten and forever maimed.

so while i was taking these pictures the other day, i saw a well-intentioned, not-dressed as Ronald McDonald woman feed the geese COOKIES. she has dark hair, i have dark hair. she had no dog, i had a large dog. did the geese notice the difference between us? no. and if i didn’t have my dog, they would have gone after me for more cookies because they’re freaking idiots. they actually were chasing me, honking, “what’s up cookie-looking person? why do you have that small lion with you? do you have more cookies? because this grass and these worms and bugs, they suck… i will talk louder for you, and flap my wings so you see me and know that i am very hungry and that your small lion does not scare me, until it turns back on me, then i am very afraid and i know that if i had to, i would abandon my babies to save my own ass if your small lion came after me.” (because it did, and NO i didn’t let Murphy loose.)

then people like me try to walk around the geese and we get hissed at and flapped at and freakin’ chased because even when i’m NOT in my Ronald McDonald suit, they think i’ve got bread in my bag. which i don’t, because not only do i not feed the geese, but i don’t have a bag with me.

so i told the woman: don’t feed the geese. please stop.

“but they’re so little and they need food.” she said.

“no they’re not and that’s not food. it’s a cookie. before i start sounding all judgey and whatnot, would you feed a 2-week old infant that cookie? no, so don’t feed it to the geese for that reason alone. they’ve got all the grass and insects and their own defecation to eat all they want… and because you feed them, they think everyone has food and now they’re hassling me. a kid lost his finger because people think the geese don’t have enough to eat; they thought his finger was food because they’re stupider than a rock. they don’t need your cookies or bread. look at them: they’re the size of a smart car… they don’t need you to feed them.”

So… you wanna feed baby geese? Super. Guess what: they grow fast. In a week, they’ll be ugly as butt and then they’ll chase your ass all over the park flapping and honking,”Wait! Ronald! Don’t you have a cookie? Remember?! I’m that baby you fed a lasagna to last week… but I’m and growing and I’ll be as big as a calf in a month, but don’t you have a cookie, Ronald?”  and you’ll be HOSED because they will REMEMBER you and anyone who looks like you, aka all bipedal humans because of that imprinting. We basically train them to attack us. So do us all a favor: stop feeding the geese.