This is not a weekly “column” about my kids. This is a weekly column (there, I said it) about three things I think you’d like to know about, but even more so, it’s three things I’d like to share. Here’s last week’s when I wrote about wiper blades, hair color and love: https://mollyfielddotcom.wordpress.com/2013/01/31/three-things-thursday-1/

I’ve refined it since then: The three things will be attuned to three very elemental parts of ourselves — mind, body and spirit — we need to enrich to live fuller lives. I will try to keep these posts to less than 750 words.

Last weekend, my fam was in town. It was glorious to see them all. We went to the Hirshhorn Museum in Washington, DC. Specifically, we went to see the exhibit of Chinese dissident artist (and all around freakin’ badass) Ai (“aye”) Weiwei (“way-way”). He is a proud middle-finger upper at the White House and Tiennenman Square and has the shots to prove it. Weiwei was beaten for attending a protest in China and turned the resultant brain scans showing the injuries into art. His work is a giant (swear alert): up yours to the Chinese government and any government which oppresses. He has dropped a Han Dynasty Urn (crazy value of something like $50,000) just because he could and his expression is so flip about the whole thing I admire it. You can see an interview and a clip of the exhibit which aired on CBS here (the narrator’s voice makes me want to run and hide, so … uh, sorry). This exhibit is in DC until February 24… you have 17 days. GO NOW. Plus, it’s free.

Below are just some of the photos I took. I could grab photos from the site, but they are too austere; they don’t have people in them (I think he would prefer having people in the shots). Some are blurred because we couldn’t use flash.

He made a snake out of 5,000 backpacks, similar to those worn by the children whose lives ended in an earthquake in Sichuan province in 2008 when school buildings collapsed on them due to shoddy engineering and government corruption. Despite the fact that you’re in another country, you can’t shake the feeling that you are on hallowed ground:

This backpack reptile winds down the ceiling of the gallery for another 75-100 feet.

Aside from the snake was this, a wall emblazoned with a poster displaying all the victims’ names, ages and genders in a spreadsheet. As you walk beneath the snake and view the wall, a recording of the names read by various voices of surviving loved ones plays in the background: 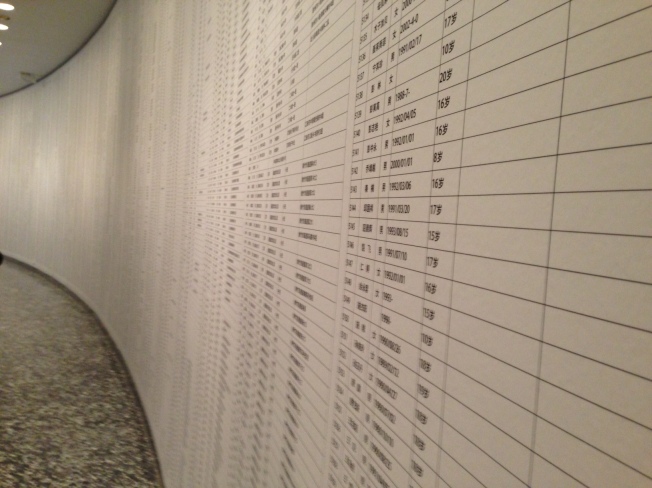 I was struck later, upon viewing my photo that he left empty cells open in the spreadsheet; a reminder of our own mortality and the lives not yet lost due to the corruption. The recording lasts 3 hours and 41 minutes and plays continuously. The placard beside it said:

A name is the first and final marker of individual rights, one fixed part of the ever-changing human world: no matter how poor or how rich, all living people have a name, and it is endowed with good wishes, the expectant blessings of kindness and virtue.

Another installation in the exhibit, “Straight” was a collection of 38-tons’ worth of rebar from the site that Weiwei re-straightened himself after the catastrophe:

“The tragic reality of today is reflected in the true plight of our spiritual existence: we are spineless and can not stand straight.” –Ai Weiwei

“Cube Light” – my video. This particular piece is amazing; it’s close to 12’x12’x12′ … you can get lost inside the cube from outside it. You’ll see my camera lens experience the same phenomenon; it doesn’t know where to focus. That munchkin chatting in the background is my nephew.

It’s gorgeous and it sucks you in. As much as I wanted to smugly say, “Well, I guess anything can be called ‘Art‘ these days,” I was eventually humbled. I was in the presence of greatness.

I don’t like being woken up abruptly. I don’t know who does. I have a progressive alarm clock. The difference between a standard WAKE THE HELL UP!!! alarm clock and a progressive one is that the progressive one gently rouses you. They all operate under the same standard: don’t traumatize the sleeper. For travel, I also downloaded a progressive alarm clock app for my kids to use when they wake. If you have a Droid, go to the Google Play app market and download, “Nature Sounds Alarm Clock” and it should be free; if you have an iDevice, go to the App Store and download “Progressive Alarm Clock”; I paid $1.99 for it. Two words: Life Changing. 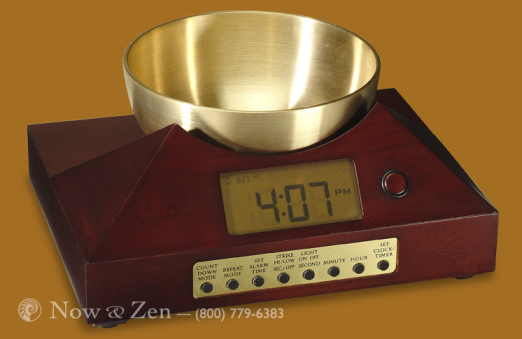 Or if you’d like one in person, they can be lovely (and pricey), go to Now and Zen and check them out. I have the brass bowl on a cherry stand and I love it. Not cheap, I saved my milk money for two years for it and I use it for meditation timing; my cleaning ladies like to put the hair ties and change from my dresser in the bowl. nitztagrbikfragalratzen…. By the way (wei), I get paid nothing nor am I compensated for any of these items I share with you.

Mad props to national chain Noodles & Company for their accountability last month after I was treated like burnt tofu at their restaurant near my home. I shared that blog post with them (highlighted in red above), they sent me an email, then they called me, and a few days later, I received THIS in the mail:

This was lovely: a HANDWRITTEN thank you card, a cutting board, a water bottle, some free meal cards and a tote bag made from recycled billboards. Let’s have mad respect for Noodles & Company, y’all. That’s awesome.

They thanked ME! Last night, we cashed in those OOPS! cards and here is the result (caption) in an email I sent to their area manager:

“Garry, Tonight was like the old nights. NOODLES IS BACK!!! The penne rosa was fresh, hot, abundant and delicious. We couldn’t wait any longer to use the cards, sinus infection or not. I hope you see the smiley face in my EMPTY bowl. Thanks again for everything. Love is in the air. Molly

The thing about apologies is this: they work. What works more? apologies and action. Noodles & Company proved that they are sincere last night. I’ve written about apologies here. Don’t bother making an apology unless you’re ready to back it up. Then it will be good for everyone’s soul.

Well, I went over by about 300 words. Captions. Sorry.