Today I am honored to host the talented, lovely and modest Lillian Connelly, a New Mexico mother of one, a painter, survivor of McDonald’s playland and a member of tribe of people I refer to as “some of the nicest people I have never met.”

Lillian recently sold her first piece at an art show, so she’s gonna be famous, peeps! She also shows her works at her online studio gallery. Along with being a wonderful artist, she’s pretty good with the words too. You can see her blog site here at It’s A Dome Life. The long and short of this piece she painted for me is that I love roosters. But I want you to know she paints beautiful wildflowers in watercolors and southwest sunsets and landscapes mixing in media to bring depth and dimension to the works. Not having seeing anything yet in my hand, I feel like some of her work reminds me of more sophisticated Eric Carle (The Very Hungry Caterpillar). Enough of my blathering!

Prince Charming And Old McDonald: The Painting of A Rooster

I’m like old McDonald over here. Seriously, between the chickens and the dogs and the cats and the people and the toddler singing, “e-i-e-i-oh,” we might as well go ahead and call this place a farm. Molly and I became friends one day through a mutual stalker convention on Facebook.

I stalked her fan page and then she stalked mine (or vice versa) and we’ve been laughing at (or with) each other ever since. She knows my life is crazy. She reads my blog. She’s seen the pictures. That’s why when she asked me to paint her a rooster I had a good, long laugh. Not so much at Molly wanting a rooster, but at the fact that my daughter has been practicing her rooster crow for days, weeks, and months (I can’t say years because she hasn’t really been alive that long yet) now.

I just knew painting a rooster was going to make my daughter crow even longer and louder morning, noon and night. I just knew I’d have to sing Old McDonald Had a Farm at least twenty times a day. I was right. I am sure Molly knew that too. I bet she is smirking the good smirk right now. You go ahead and smile, Molly. One day revenge will be mine. Well, not really, but I may record my daughter singing and force you to listen to it. I will think of something. Anyway, this is Molly’s rooster, finished:

Cock-a-Doodle-Doooo! this is the finished product. You can see that because it’s got the signature. Read more below to see how it started…

I really need to give him a name. Molly suggested a name that was “something-something gonads,” but I am thinking something more suitable for the ears of children might be a little more appropriate. I found some old sheet music in a piano book I have with a music selection called, “Prince Charming” and that seemed a much more appropriate name for this Mr. Rooster. So, I glued it to the back of the painting and now Molly can never, ever deny that she is in love with Mr. Rooster. He is her prince charming after all:

The sheet music is still a little wet in this picture, but after a few coats of gloss it will be shiny and old looking (mostly, because it is old looking). It’s from my grandmother’s music magazine “The ETUDE” and this piece of music was published in that magazine in 1907 (it’s over 100 years old). I am hoping Molly’s son will play it for her on his guitar or slide whistle. It will sound timeless either way.

So I promised Molly I would share the making of Molly’s “Prince Charming” with you, so here goes:

“Prince Charming” started off as an 11″×14″ hardboard panel. I used the back of a paint brush to scratch up the surface so the gesso and paint would stick to it better.

Then I applied a layer of gesso and a layer of white paint. The gesso is like a primer for the surface. 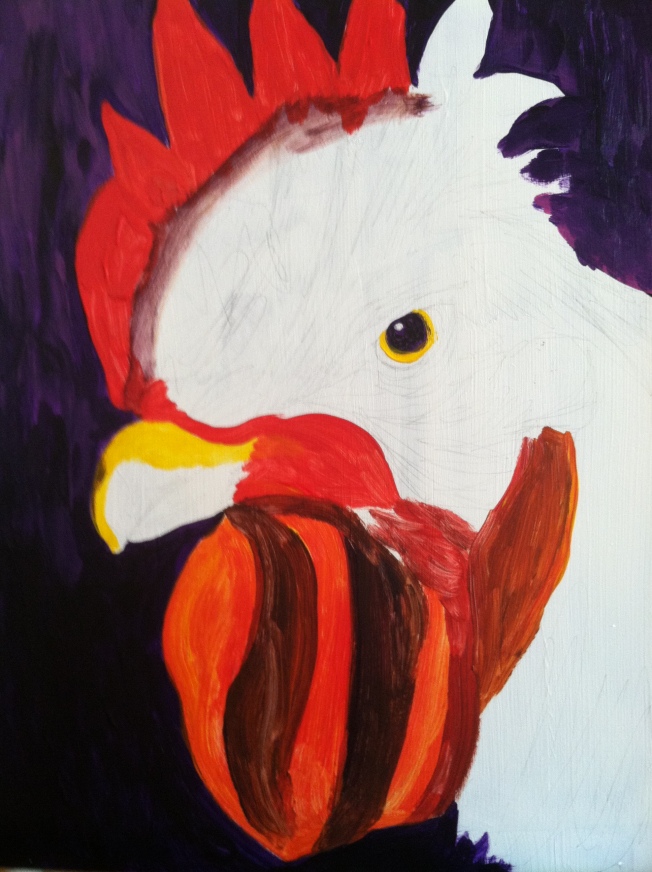 With a cock-a-doodle here and a … agh… forget it.
Once the panel dried I sketched the rooster’s head. I made him a little ornery looking because roosters are like that. Also, because that’s how I felt after singing, “And on this farm there was a roo-ster…” for what felt like the millionth time that day. 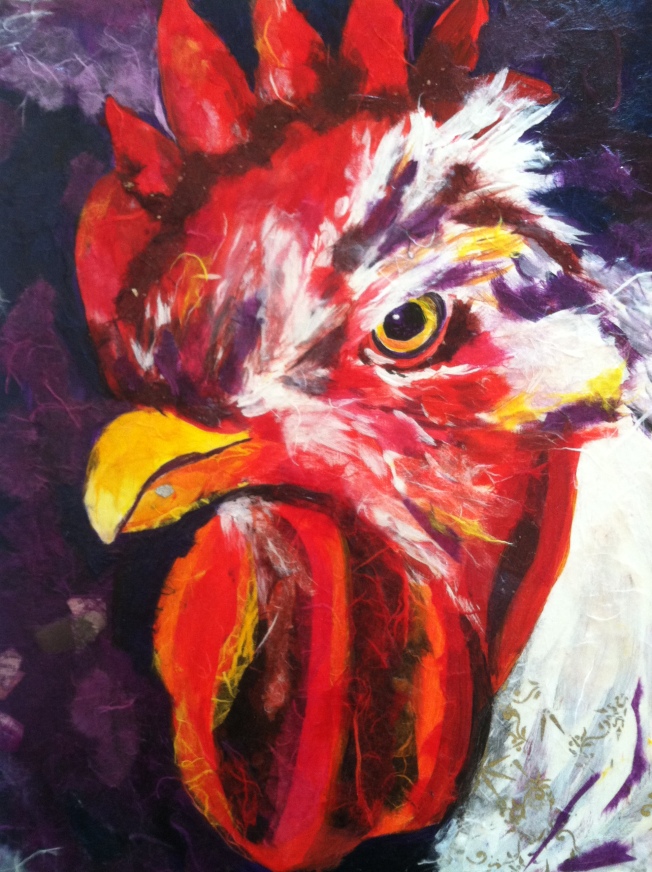 Then I started filling in the color and after a while I added gel medium to attach some paper to give a nice feathery look and add dimension. Because you know, this inanimate rooster might be stuck on hardboard, but he’s gotta strut his stuff no matter where he is.

I hope you enjoy your “Prince Charming,” Molly! I certainly enjoyed painting him.

How can I NOT enjoy that rooster?! He’s awesome! I am waiting on a Lillian Connelly original and I am very excited for him to get here. I know that once he does, these photos won’t do him justice. My downy feathers are all a’ruffle.

i’ll never figure out this facetime / take a picture of yourself thing. but there he is! woohoo! (is that a vacuum behind me?)