Welcome to a new feature that might make it for more than one installation.

It’s the Tuesday Morning Press wherein I write nonstop (lucky you) between returning from walking the kids to school and getting ready to be late for yoga.

1) I went to Pennsylvania Dutch country this last weekend with my good friend RICK! and her sons along with Thing 1. He is 14. Soon I will just call him the 14-old-old because I’m lazy. Yes, I see the irony about typing more letters to save chaos. I’m also very conflicted about this decision so maybe I’ll just let it ride out and see how it goes. Back to the trip. We try to go every October because they have this awesome auction held by a local Amish contingent and I like to buy other peoples’ castaways. I have a nice collection of random brass-like things from auctions in years past. I’ll take a picture you can ignore in a couple days.

Per that trip, I intended to take pictures of the experience. I did bring my nice camera, but not the right lens, so what I’ll do is lie to you and tell you that the pictures I took are from my most recent trip. The thing is, it’s not like the Amish are up to anything new; they didn’t break out in a flash mob of silence and piety (well, maybe they did and I didn’t notice because it’s how they are anyway) so the pictures I took are really quite pleasant and HEY, I’m NOT harshing on the Amish. I dig them. I just wish they’d shower more often than they do and make up their minds about the whole fake mother-of-pearl snaps instead of buttons thing on their shirts — several of which I found to be rather flaaashy.

Auction score though: I got a brand new 20′ aluminum, Werner brand, Made in China extension ladder for $70. Holla! And some massive pumpkins for cheap. Here’s a pic of one: 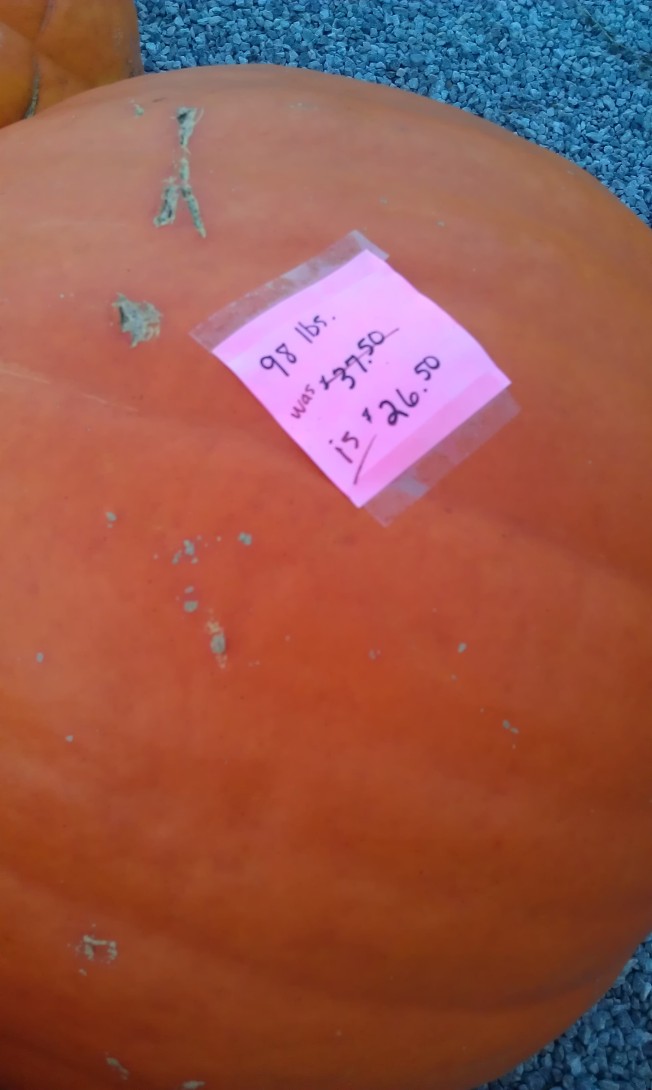 this pumpkin is so big i couldn’t fit it in the camera.

One year, the pumpkin was pecked at by squirrels. This year, I’m gonna come up with some sort of hot pepper glaze to put on it so the bastards leave it alone. If any of you guys have advice for me in that arena, I’d appreciate it. I’d ask the Amish, but they pretend to not understand anything I say that doesn’t involve my giving them my cash. I AM NOT KIDDING. Look, the lady at the local Target up there told me all sorts of stuff about what they buy from her. Trust me: it’s not just black shoes and charcoal briquets.

2) I am joining a multi-author blog called “Peevish Penman.” I posted an interview I wrote and asked interview-y questions of Rob Hines, another aspiring writer who’s far less confused than I am. Check out the interview at this link highlighted right here. According to the schedule, my interview (the one wherein I answer the questions) posts next week and you’ll find I’m my usual loquacious, candid and distracted self. I’ll let you know when that posts. So that’s big news for me… I like the idea of broadening my aspect ratio.

4) I’m planning to write another book for NaNoWriMo next month, so prepare yourself for some randomness from me as I spout off everything I’m not allowed to put in my so-called book. What happened to the last one? Oh… nothing. That’s part of the problem. I hereby pledge to completely and utterly immerse myself in the upcoming project to ensure that I continue to totally ignore the first one. I want to get back to the first one. I do. It’s just that I’m … well, afraid. It has good bones, I just need to figure out what to do with it. But that’s not your problem. It’s mine.

5) I’m starting something on Thursdays too (watch it not happen this week): sort of a throw back post. Many of you who follow me on WordPress are new to my content and there are other posts I wrote when I was on Blogspot. I will re-post some of those writings if it makes sense. If nothing shows up on a Thursday you can count on one of the several scenarios: I’ve run off to Vegas to fulfill my life-long dream of being in a yet-to-be-formed band of vaudevillian unicyclists; I completely forgot about the plan to post old stuff; or, yeah… one of those two. I’d put my money on the latter if I were you.

Well, it’s time to go and distract myself with something else before I push out for yoga. The weather is a crisp 44˚ and partly sunny right now, so going on the water for a row … is just not … appealing for me, although I do want to snap some pics of the foliage from the river; it’s beautiful.

ps – oh yes! 3) I knew there was a third item! I posted my first guest blog … thing yesterday at Good Geek Ranting! Check it out at http://goodgeekranting.wordpress.com/2012/10/08/miss-molly-whats-in-a-name-and-the-new-drivers-license/ that title in and of itself is appealing. You know it…